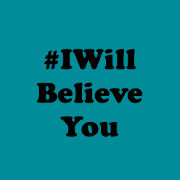 How to Get/Make Buttons

We are members of all kinds of fandom and the scientific community. The struggle of recent years to get harassment policies enacted at our conventions and gathering spaces is starting to show results.

Yet too many people are dismissed, minimized, or outright disbelieved when they are sexually harassed and assaulted.

We are no longer okay ignoring the broken/missing stairs in our communities and lives. No one should have to feel unsafe simply being in a public space, especially those spaces organized around the events and passions we enjoy.

Our pledge, the pledge of #IWillBelieveYou, is that those of us with the privilege and resources to do so will offer to be an ally, an active listener, and to support those who have been hurt by harassers or worse in our communal spaces.

We are strongly inspired by the #IllGoWithYou project.

There are many things you can do to be an ally, but they fall under four big categories.

#1: Examine Your Own Behavior: As Bitch Media puts it, "...it's your job to ask people you care about what they've experienced. Really listen to them when they share their stories...rethink your own behavior if you're doing something that might make people uncomfortable on the street—even if you think you're just being a nice guy."

#2: Listening and Support: Take a few minutes to read The Healing Center's guide on how to be a good ally and support person at http://www.thehealingcenter.org/how-to-be-an-ally.aspx

#3: Do Not Be A Passive Bystander: The guides at Stop Street Harassment have many suggestions and tips for what to do when you find yourself a bystander to harassment. Some key points from that page:

If it looks like a man is bothering a woman, ask her, “Is someone bothering you?” That question alone may deter a harasser who believes no one will intervene. If she says yes and the harasser does not leave or persists harassing, tell the harasser to stop or call for help

If a woman in a crowd says she has just been harassed or had someone touch her inappropriately, call out a supportive comment such as, “Whoever did that, it is not welcome,” or “We do not tolerate that behavior.”

If you see a woman who has been verbally or physically abused, you can ask her if there is anything you can do to help. If she says no, leave, because you do not want to be another person intruding on her space. If she says yes, try to help her as best you can.

At conventions and conferences, be aware of what harassment policies exist and what the procedures are so that you can offer than information if needed.

#4: Show Support Publicly: This is one of the goals of #IWillBelieveYou; that by visibily demonstrating the presence and existence of those who will intervene and support, we will be able to minimize and eliminate the spaces where harassers operate.

The buttons are available at Wackybuttons.com. Click on "Order" and "Order by Design Code", then enter design 5199797.

We make no profits from these buttons, and have chosen the vendor with the greatest flexibility and lowest price available in order to make these buttons as available as possible to all people.

If you wish to use a different vendor, you can download the template in JPEG, PNG, or CMYK-separated TIF.

This project must be shared in order to be effective. Please take a few moments to tell people about this project on the social media platform(s) of your choice.